As many of you will know, I have spent the past few years researching and writing about the fascinating lives of some of the women in the Pre-Raphaelite sisterhood for my novel Beauty in Thorns. BEAUTY IN THORNS is an historical novel for adults which tells the story of the tangled desires behind the famous painting ‘The Legend of Briar Rose’ by the Pre-Raphaelite artist Edward Burne-Jones.

Four very different women tell the story: the wives, mistresses, and muses of the Pre-Raphaelites, Georgie Macdonald, Lizzie Siddal, Jane Burden, and Margaret Burne-Jones, the artist’s beloved daughter.
The Pre-Raphaelites were a collection of daring young artists who outraged Victorian society with their avant-garde paintings, their passionate affairs, and their scandalous behaviour.

Dante Gabriel Rossetti was one of the founders of the Pre-Raphaelite Brotherhood in 1848.  His work and ideals inspired Edward Burne-Jones and his friend William Morris to create their own art, and with it, to try to change the world.

The ‘Sleeping Beauty’ fairy tale haunted Burne-Jones’s imagination, and he painted it many times over the course of thirty years, culminating in an extraordinary quartet of paintings that were greeted by the public with ‘enthusiasm amounting to ecstasy’ in 1890. It was bought for 15,000 guineas, the largest amount ever paid for an artwork in Britain, and Burne-Jones was consequently knighted in 1893. Burne-Jones and his friends drew together an extraordinary group of young women who all struggled in their different ways to live and love and create as freely.
In chronological order of birth: 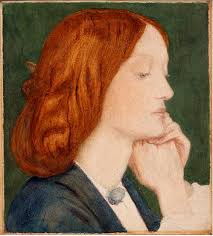 Lizzie Siddal (b. 1829)
Discovered working in a milliner’s shop, Lizzie became one of the most famous faces of the early Pre-Raphaelite Brotherhood, modelling for paintings by Rossetti and Millais (she is his famous Ophelia). She and Rossetti began a passionate and turbulent affair. Heart-broken by his infidelities, Lizzie took refuge in laudanum. As she lay dying, Rossetti promised to marry her if she would only recover. They were married in 1860, but the birth of a dead child caused Lizzie to sink further into depression and addiction.  She died of an overdose in 1862. Rossetti famously buried his poems with her but later had her exhumed to retrieve the manuscript. Jane Burden (b. 1839)
Jane was discovered by Rossetti and Burne-Jones in Oxford, and became one of their most striking and famous models. She married William Morris, but began a scandalous affair with Rossetti after the death of Lizzie Siddal. She had two daughters, Jenny and May. Her eldest suffered from epilepsy, then thought a most shameful disease. Georgie Macdonald (b. 1840)
The daughter of a God-fearing Methodist minister, Georgie met Ned Burne-Jones when she was ten. He awoke her to a new world of art and poetry and beauty, and she shared with him her favourite fairy tale “Briar Rose”, which inspire him to create some of his most beautiful paintings. Georgie married Burne-Jones at the age of nineteen, after a four-year engagement.
The early years of their marriage was idyllic, but in 1864 Georgie contracted scarlet fever, which brought on the premature birth of her second child, who consequently died. Her third child – a daughter named Margaret – was born in 1866, the same year as Burne-Jones began a passionate and ultimately calamitous affair with his model, the beautiful and fiery Maria Zambaco. Margaret Burne-Jones (b. 1866)
The third child born to Edward and Georgie Burne-Jones, after the tragic death of their second son. She was a shy and reserved child remarkable for her beauty. As she grew, she found herself in demand as a model for the Pre-Raphaelites, but struggled with the unwanted attention. In 1888, she fell in love with the Scottish writer, John William Mackail, but her father refused to countenance their marriage. He was obsessively working on his painting of her as the sleeping princess in “The Legend of Briar Rose” series, and was afraid of losing his muse. Margaret had to find the strength to defy her father and marry the man she loved.
The Pre-Raphaelite circle also included Effie Millais, Fanny Cornforth, Christina Rossetti, May Morris, Mary de Morgan, and many others who I wish I could have included in my novel. maybe one day I’ll write something about them too ….
PLEASE LEAVE A COMMENT – I LOVE TO KNOW WHAT YOU THINK!
Share
0